Even in 2021, some of the solar module manufacturers we know are launching new products. The Corona pandemic has cost many companies their existence. The solar industry also saw supply chains and completion of jeoparized due to the ongoing restrictions, among other things.
Nevertheless, the pandemic does not stop especially large companies such as Ja Solar, Trina Solar and Longi Solar from bringing newer and even better solar products to the market. In general, Chinese photovoltaic manufacturers are trying to outdo each other within the new introduction of modules. While the performance is getting bigger and bigger, the dimensions and the weight are increasing at the same time. As a result, these modules are only conditionally suisuitable for use in photovoltaic roof systems.

In our solar module comparison you will find the recently announced models of individual well-known manufacturers.

The first module in our listing comes from Chinese photovoltaic manufacturer Trina Solar. This powerful module, which is also called “Vertex S”, storms the market with an output of up to 405 watts. The special feature of this module is that it was developed specifically for installation on private and commercial roof systems. Those who value appearance and aesthetics above all else will hit the bull’s eye with the Vertex S module series.

This module looks particularly high-quality and completely black due to its ultra-thin, almost invisible conductor paths. This noble design makes it perfect for residential rooftops. Due to the small dimensions and yet large power, this module can also be mounted in tighter spaces. Due to the minimized cell spacing, it achieves a module efficiency of 21.1% and an output of up to 405Wp in this constellation.

Its multi-busbar technology stands for:

For the first time, Trina Solar offers a class of modules that can deliver up to 65W more power than a conventional product of comparable size. The following features may also convince you to take a closer look at this product:

By building an extensive network of distributors throughout Europe, Trina Solar has been able to develop the Vertex-S series specifically for the European rooftop market.

In addition to this game-changing development, Trina Solar has also launched another product. This is the “Trina Tracker Agile 1P Dual Row”, which is compatible with high power modules ranging from 400 to 670 watts. This includes the Vertex S series. This product is touted by designing multiple drives and two oscillations, with improved overall stability and reduced aeroelastic effect. According to the Chinese photovoltaic manufacturer, this design improves load transfer efficiency, avoids rotational errors and improves the overall structure. In addition, it says the spherical bearing can minimize the load and deformation of the structure and further improve reliability and adaptability in complex terrain. In addition, the manufacturer says this tracker is equipped with a sophisticated stowage strategy. This stowage strategy is designed to prevent structural failure in particularly strong winds and also increase system reliability.

With a length of 72 meters, the Agile 1P leaves room for a total of 120 modules per tracker. Due to this high number of trackers, it is estimated that a project’s output can be increased by 15.6 percent with the same layout. Furthermore, a cleaning robot is included, which is supposed to remove sand and dust on the respective modules. This removal makes it possible for the system’s power generation to be increased by more than 10 percent. What also stands out here is that, according to the manufacturer, the number of trackers in a 1-megawatt project are reduced by 33 percent compared to conventional single-row 1P trackers.

Chinese-Canadian photovoltaic manufacturer Canadian Solar is also trying to convince the market of its new module series, which can produce 640 to 665 watts of power.

This product is expected to be the most powerful product in the manufacturer’s range to date. In addition, a total capacity of 10 gigawatts is targeted by the end of the year.

Within these series, the Hiku7 monofacial module and BiHiKu7 bifacial module stand out most. The production capacity of these two modules is expected to reach ten gigawatts by the end of 2021. According to the manufacturer, this new generation of modules is expected to deliver the industry’s most competitive cost of electricity (LCOE) as it further lowers the system cost (BOS) and other costs for solar power plants. The following manufacturing features distinguish these modules:

According to Canadian Solar, the HiKu7 CS7N-MS series is capable of reducing balance-of-system costs by up to 5.7 percent and a project’s cost of electricity (LCOE) by up to 8.9 percent compared to using conventional 445-watt modules in photovoltaic systems.

In addition to Canadian Solar, the Chinese photovoltaic manufacturer “JA Solar” also wants to convince with a 415-watt module, for use in private or commercial projects.

Among other things the following characteristics can be assigned to this module:

The manufacturer particularly emphasizes that due to their relatively low voltage value compared to other rooftop modules, these modules allow the installation of larger photovoltaic systems. This is done on the basis of a single series string and leads to a reduction in BoS costs.

Lastly, we looked at Chinese photovoltaic manufacturer Longi Solar. It too recently announced that it is adding two new modules to its Hi-MO 4m product line. These modules feature a 60-cell and 72-cell design, respectively, and complement the 66-cell panel that the company had previously introduced.

Below, you’ll get a brief look at the respective unique selling points of these two novel products.

Both models are protected with 3.2 millimeter thick tempered glass and have an anodized aluminum alloy frame

In our comparison, we got to know some top models from highly competitive photovoltaic compa nies. If you value aesthetics and looks above all else, you’ll hit the bull’s eye with Vertex S series from Trina Solar. With an output of 405 Wp and an efficiency of 21.1%, this module series can be installed on one’s own private residential roofs with ease. The new module series from Canadian Solar is particularly suitable for the installation of high-performance modules in the 570 to 665 watt range. The so-called Hiku7 and BiHiKu7 series is storming the market with an efficiency of around 21% and is expected to reduce BOS costs in the long term. The new modules of the Chinese photovoltaic manufacturers JA Solar and Longi Solar can also convince with some new details.

LONGi Solar – The King of Solar

An interview with JinkoSolar

Longi releases a new TOPCon n-type module: Will n-type dominate the market in the future? 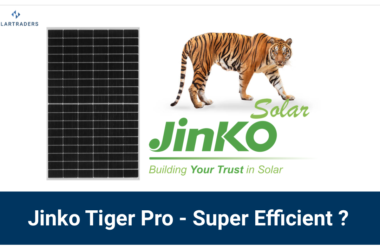